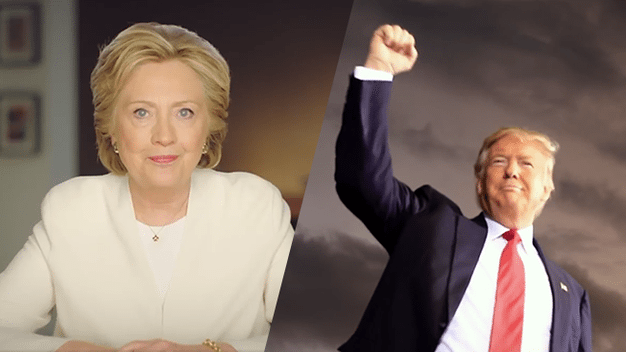 by vanessa
in Uncategorized
Comments
The countdown to voting for the next US president is on!

After months of online banter, commenter debates, and overall media madness, it’s time for Americans to go out and vote for the next President of the United States. As the media spins their last poll predictions, we turn to YouTube to find out who the online video world is predicting will win the election.
With billions of video views, millions of videos and thousands upon thousands of commented opinions, it’s tough to narrow down who the YouTube world believes will be president. So instead of making any assumptions, this article showcases five YouTube statistics/videos that could be used to predict the outcome of the 2016 presidential election:

It’s no surprise both candidates have garnered a lot of search queries on YouTube. Below are two interactive charts highlighting each candidate’s YouTube search popularity over the last 24 months.
Trump vs. Clinton Search Interest in All Categories/Topics:
The first Google Trends chart emphasizes the popularity of each candidate’s name in comparison to all topics and categories on YouTube, which includes but is not limited to business, entertainment, literature, finance, health, news, sports, etc.:
As the chart showcases, Trump holds search popularity over Clinton by 32%. However, you’ll notice that Clinton’s search queries increase as election day gets closers. So why is Trump so much more popular? It may be tied to the many media controversies and a heighten public interest in such an unlikely political candidate.
Trump vs. Clinton Search Interest in Politics:
The second Google Trends chart highlights each candidate’s search interest when matched with politics, including topics such as election, campaigns, polls and media critics:
Conclusion: Overall, Trump is more popular on YouTube; however, Clinton is more popular when in comes to content/search queries relating to politics. So, if search interest were a form of voting, that means Trump would win the election, no?

Okay, now what if America secretly selected their President by their YouTube Channel stats? Who would win? See below for a review and breakdown of each candidate’s channel:
Team Hilary:

Conclusion: Overall, Clinton’s YouTube channel is much stronger than Trump’s channel, even though Trump had a 22-day head start on joining the social network.

3. Who would the world vote for?

Imagine if every country in the world had a say in an elected country’s leader. That would be downright crazy right? In this case, could other countries thoughts about who is suited for the US president act as a prediction of who will win the polls? Watch the video below to find out what other countries think about the candidates:
Conclusion: The video above doesn’t declare an overall candidate preference; however, most of the countries seem to lean towards Clinton.

Influencer marketing is more than a tactic used by brands and companies to spread the word about a product or a service. Both candidates are you celebrity influence in one way or another to sway votes. However, regarding celebrity endorsement, Clinton seems to have more big names to publicity back her; however, this did not stop Trump from fighting back with his video endorsements.
See below for both Clinton’s and Trump’s paid and unpaid celebrity endorsement videos.
Clinton Endorsements:
Trump endorsements:
Conclusion: If you’re going to follow the voting beliefs of some of the world’s most popular celebrities, then you will be voting for Clinton.

5. May the Best Ad Campaign Win?

Trump’s Last Words Ad:
Clinton’s Last Words Ad:
Conclusion: Both candidates have spent a lot of ad dollars to get their values/points across to the country. However, if we rate their last word ads by views, Trump takes the lead by miles with 5,275,482 views. It’s important to note that Trump’s last campaign ad was released a couple of days early and was reportedly supported by a 4 million dollar ad spend. Clinton’s last campaign ad only has 18,050 views and counting.
Conclusion: YouTube Videos/Stats Predict Hillary Clinton Will Win the Election
As for this election prediction article, Clinton wins 3 of 5 categories:
YouTube Channel Cred
World Vote Cred
Celebrity Endorsement Cred
And Trump wins 2 of 5 categories:
Search Trends Cred
Ad Campaign Cred
As noted at the beginning of this article, it’s tough to pinpoint who will win the election from reviewing YouTube content; however, this post was a fun way to break down both political parties based on their YouTube presence and the video content that surrounds their names. Hope you enjoyed the predictions if you have any ideas of who might win the election please share them in the comments below!